This postman (cyklende postbud) - designed by Carl-Henning Dalsgaard - started working on the 23rd October 1963 for the Danish Post and did this job for 24 years (--> 1986). He was responsible for the delivery of mass mailings such as postcards (Brevkort), printed matter (Tryksag), letters (Brev), .....

His work is documented by thousands of these objects - categorized in the online catalog as "P.P. postage paid" items:

The album at the end of this article gives a glimpse of the variety of issues. It is far away to be complete.

The framed picture of the postman on his bicycle with the inscription PORTO BETALT = Postage Paid (PP) has not been changed over the years. The bulk mailings could only had been placed at certain post offices. In case of a customer order, the clichés with the cycling postman were sent to the printing house carrying out the order. The clichés were etched 4 mm deep, suitable for the printing of large orders. Later printing was done in the offset process.

An assignment of the number to a certain post office is hardly possible, since a cancellation was not provided. Here a rare exception (favor cancellation or return card?): 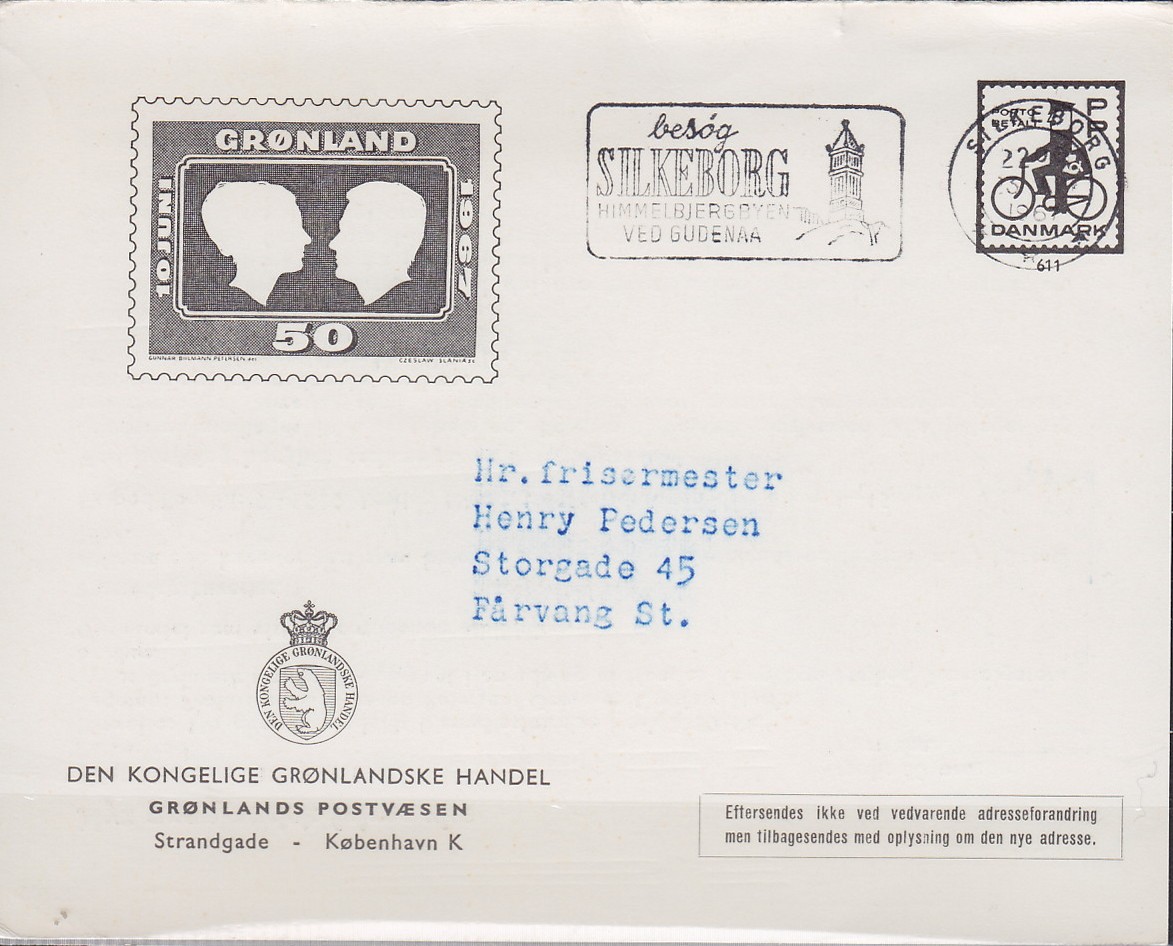 The postcards used by the Danish Post served mostly for advertising new stamp issues. They were initially designed as rouletted folding cards, whereby the back of the address side [1] became the order form [2]: 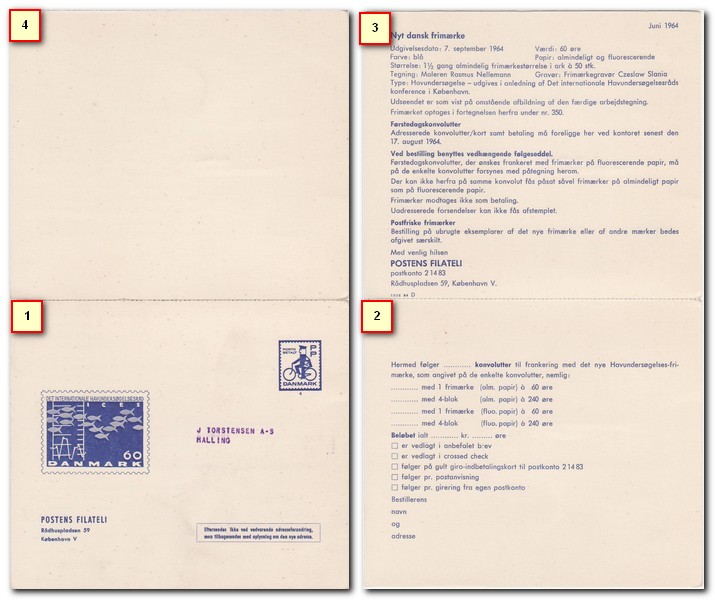 The text describing the new issue is shown on side [3]. This second part should had remained with the customer. But in fact many buyers sent back the card undivided. In this case Postens Filateli returned the 'customer part' of the card with an affixed stamp cancelled on the first day of issue on side [4]: 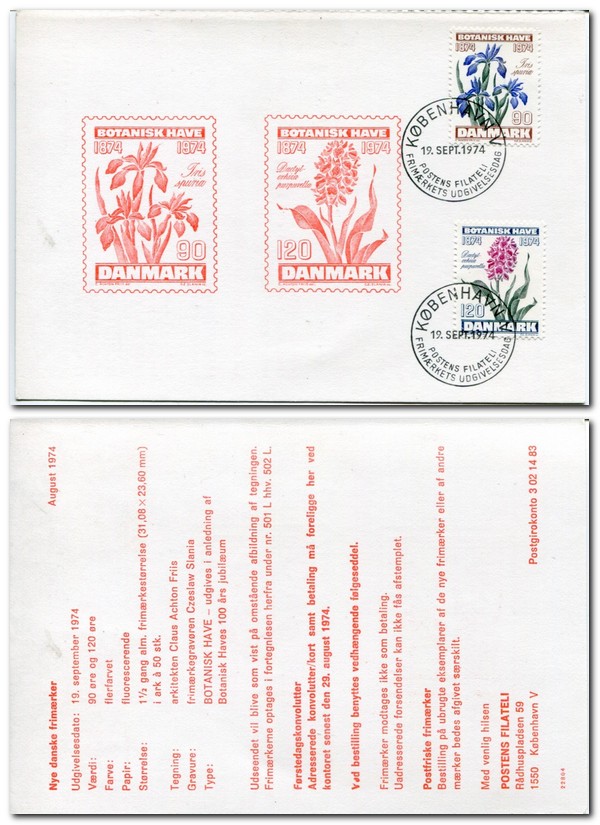 In this way the customer had a FDC including a description of the new issue. Other FDCs combine the address part [1] with the description part [3]. For us bicycle stamp collectors this of course is the more interesting variant: 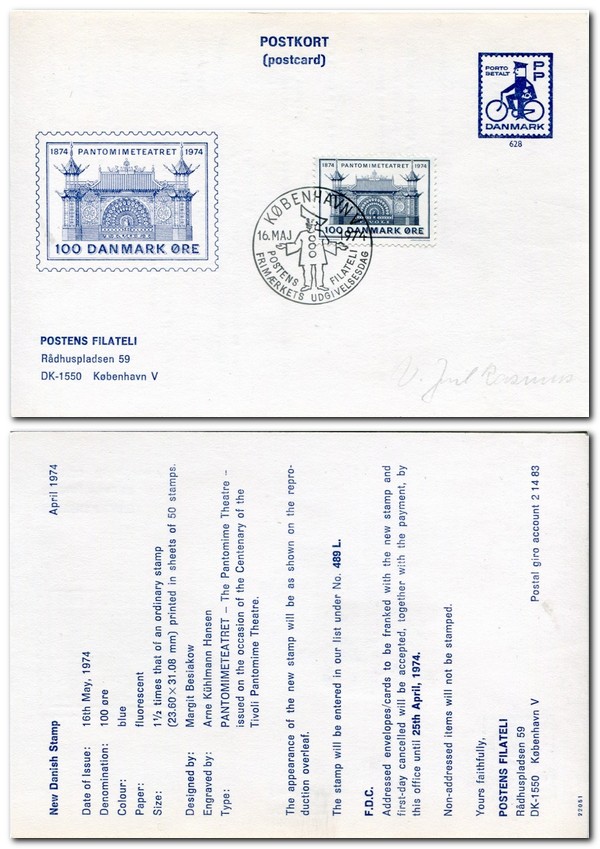 This FDC, sent from Greenland to Odense in Denmark, has a special “cancellation” on the address side [1]: 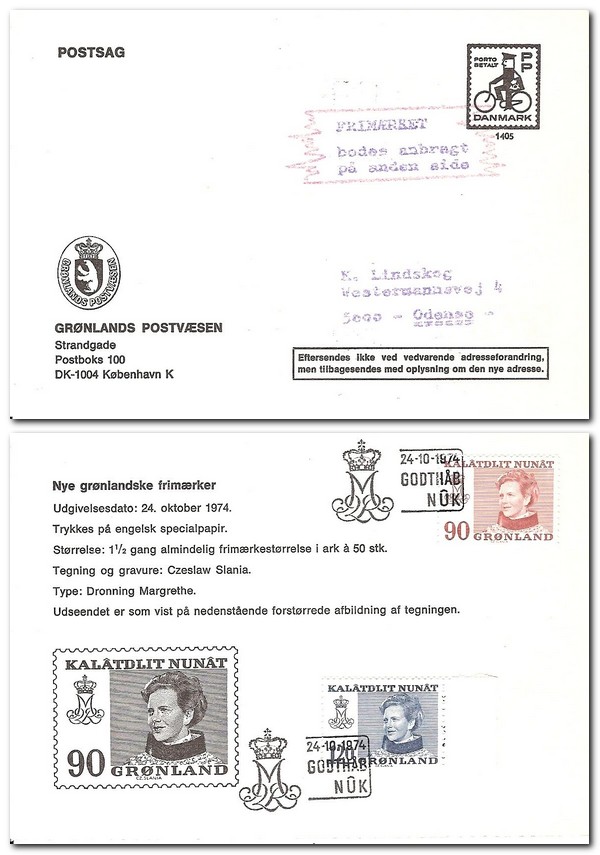 “Frimærket/bedes anbragt på anden side” (The attached stamp is to be found on the other side). It seems as if the Porto-Betalt-postman is not responsible for the postage. Even registered FDCs could be found: 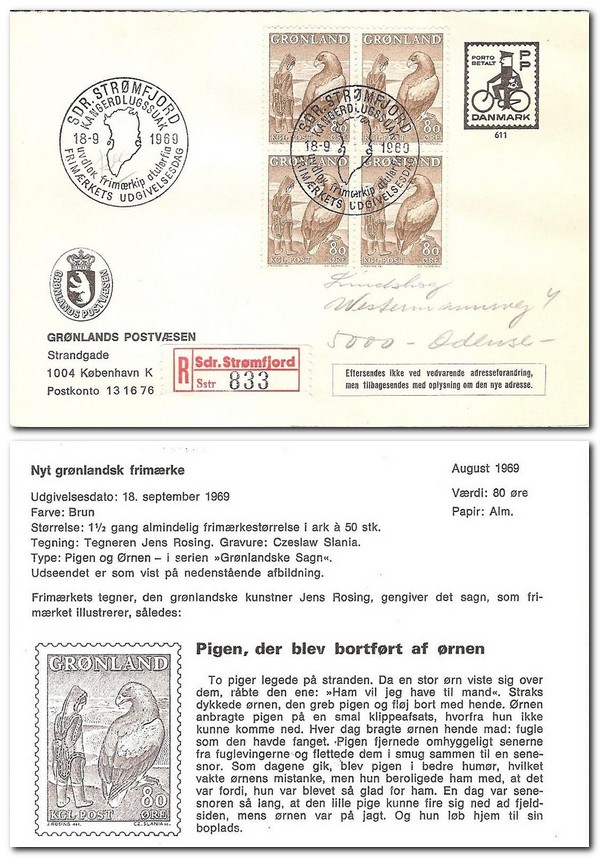 Question to the specialists: is this the correct postage? Nowadays these FDCs and complete folding cards are hard to find.

Only early postcards from the years 1964/1965 do not have the imprint “brevkort” on the address side. Another phenomenon: There also exist cards without an address, which have found their way into the collectors community: 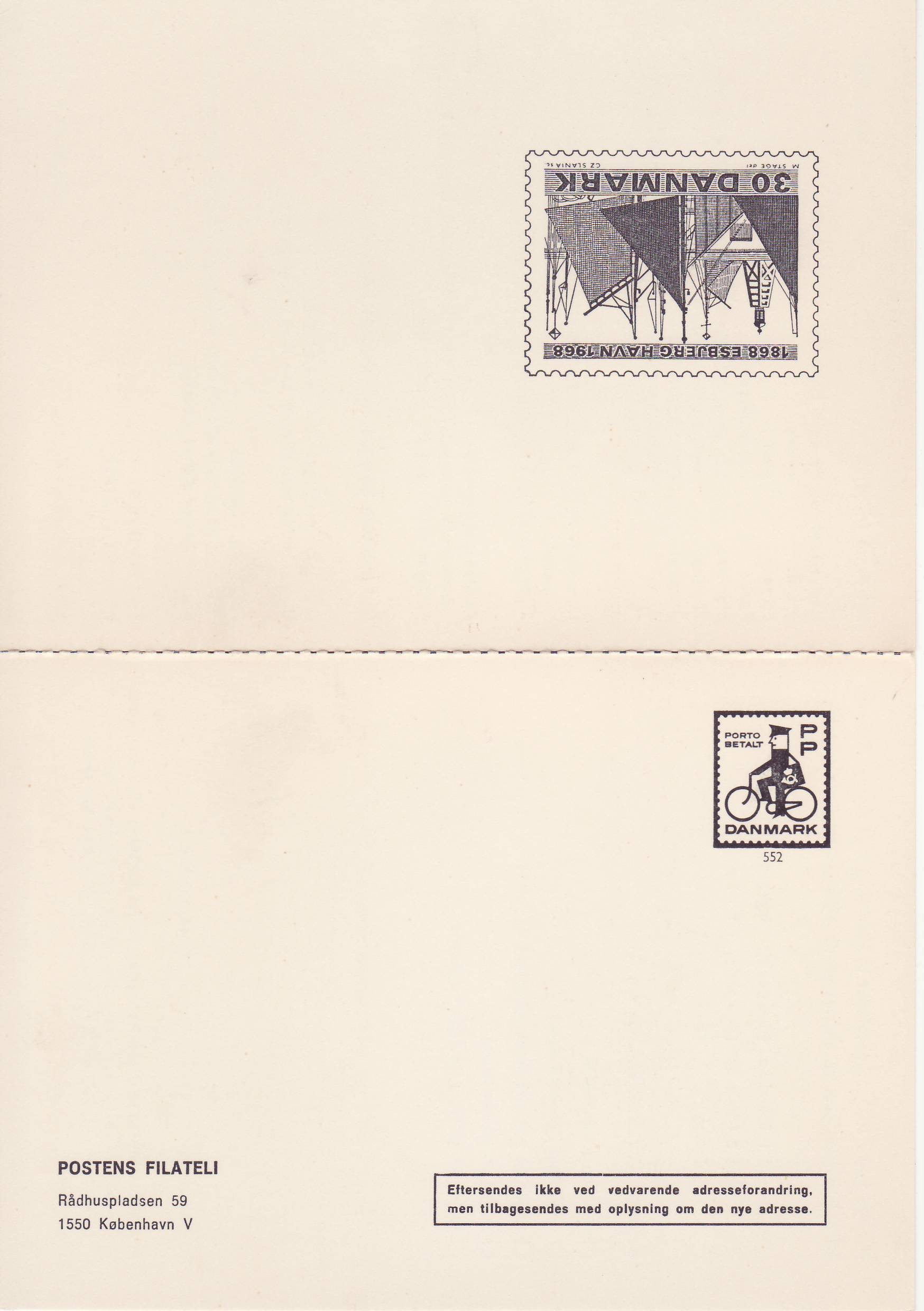 Perhaps it was a supplement to another, anyway necessary mailing? 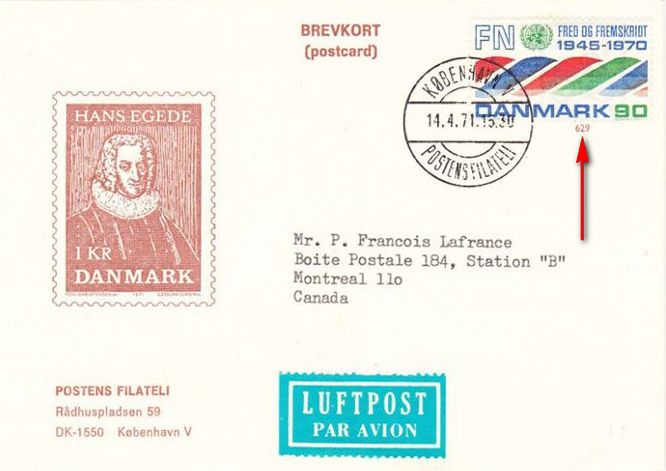 These ‘foreign cards’ had no attached customer part.

The quality control was not too strict in these (private printer) products, so that many print variants can be found, for example: 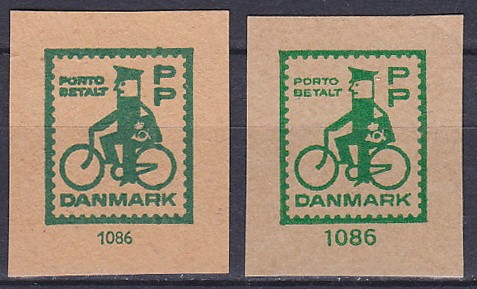 - - -   different distance between number and frame 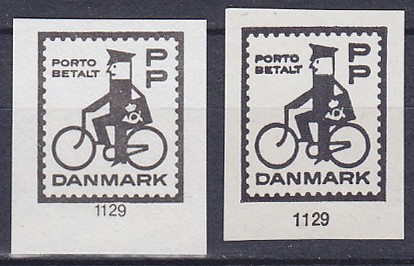 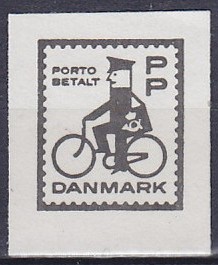 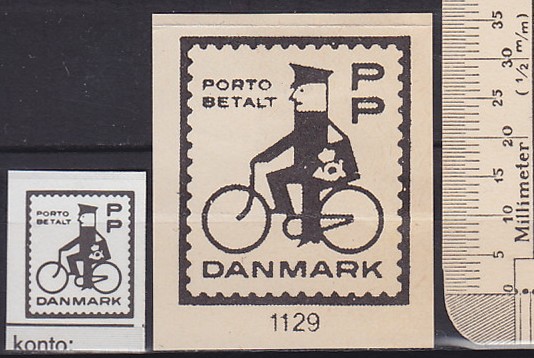 - - -   printing with a paint surplus makes the perforation appear quite different: 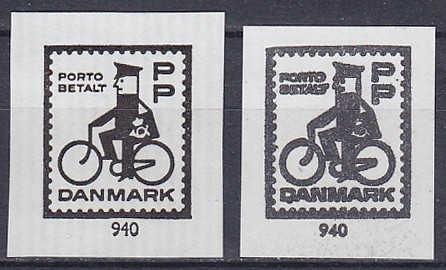 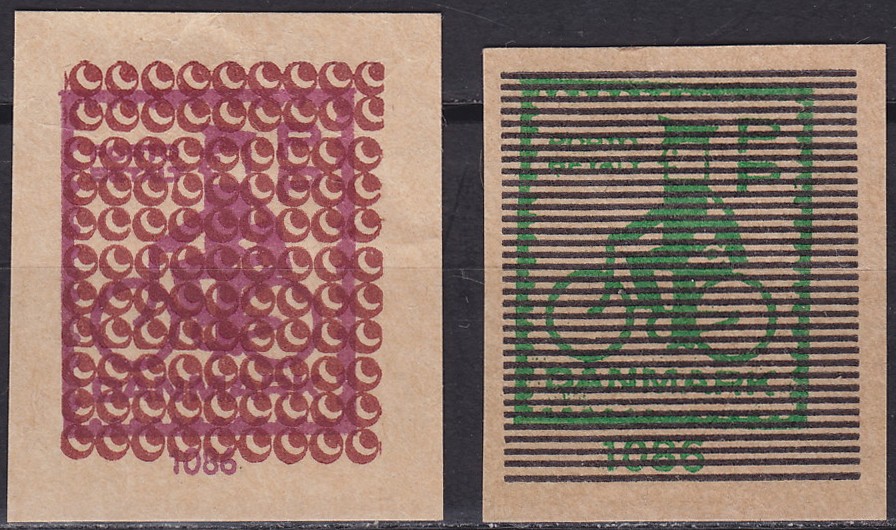 - - -   printing on different-colored paper or paper with a different structure also makes the stamp appear in a different color.

With this large diversity of over 10 000 items a separate bicycle stamp collection can be assembled. The costs are comparatively low. In former times many items ended up in the wastebasket, so that nowadays you have to be patient while searching.

If you don't collect these snippets, you are welcome to offer them for sale: just send an email to:
This email address is being protected from spambots. You need JavaScript enabled to view it..