This Sierra Leone stamp issued on 21st December 2015 was created by the stamperija. This agency from Lithuania produces postage stamps of various countries, represents their post offices and distributes their stamps upon contract. 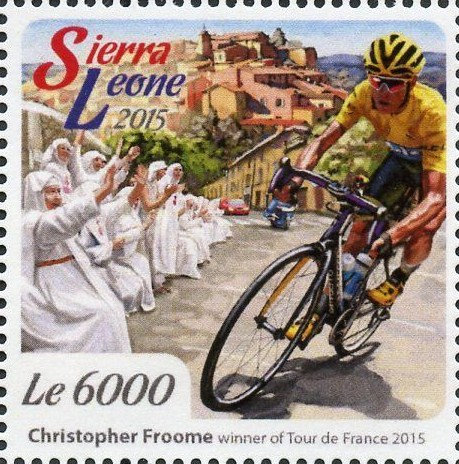 The stamp shows a group of nuns cheering Christopher Froome in the yellow jersey as the winner of the 2015 Tour.

Please compare the stamp with the original photo: 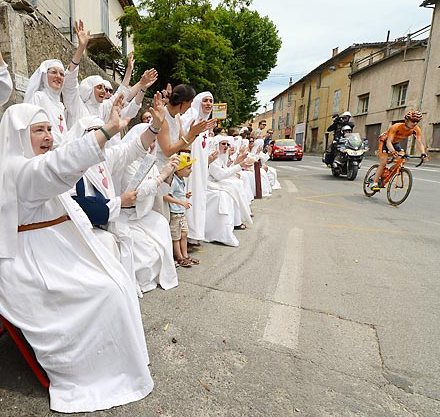 The group of nuns from the Monastery Consolation in Draguignan is unmistakable. The mother of the little boy with the yellow cap in the middle of the group of nuns now wears a white headscarf. She probably joined the monastic order, but unfortunately she was not allowed to take her son with her. The Rabobank racer mutated on the stamp to Christopher Froome.

Severe errors or artistic freedom? Stamperija claims: "We consider it as a particular form of art, illustrating the essential events and personalities throughout history. ... The team of our devoted designers does its best to create actual and meaningful postage stamps that would suit Your demands.”

But which context exists between Sierra Leone and the Tour de France 2015? Probably none: the Tour has never led through this country and a participant from Sierra Leone in the Tour 2015 does not exist either. Isn’t it curious, that there is such a long period between the event in July and the date of stamp-issue in December? It is definitely no ‚actual‘ issue – as claimed by Stamperija.

It is doubtful whether it was possible to buy this stamp in Sierra Leone at all - or have you ever seen a genuinely mailed letter with the stamp above? Most likely not. By the way: on the 21st December 2015 Sierra Leone issued another 98 stamps - in total 867 stamps in the year 2015 (all listed in the Michel catalog). More than two stamps per day - Sundays and holidays included.

The best is to forget this issue quickly, even if the limited edition of 1000 pieces suggests an enormous increase in value for the future.

Stamperija further claims: “Stamperija Ltd. produces diverse thematic stamps to satisfy the demand of stamp dealers and stamp collectors ...”  So if we all stop buying these snippets, there will be no demand from collectors and stamperija will stop producing these 'meaningful' bicycle stamps. Start today and you will see how well you feel.

The Stamperija issues are nevertheless included in the online catalog of this website, in order not to prescribe to anyone what he has to collect. However, since January 2017 they are marked with a red warning cross.

Those countries, which Stamperija claims to have solely a contract to print and sell the stamps, are often also "supplied" by other printers, mainly coming from Russia. In the following album you find a selection of these cinderella sold on ebay as 'stamps':

Please click on the picture to enlarge and see more of them.

These items are made very carelessly and often contain errors, such as misspelled or even missing country names, mirrored letters and pictures, .... So it is not too difficult to identify these bogus issues. The above album, gives an aid at which countries one should be particularly skeptical when buying stamps.

Translation/Adaptation of a chapter in "GEHOORD, GEZIEN, GELESEN" in Dutch from Hans de Kloet